I would like to reflect on the beginning of Advent and on the pandemic. The restrictions imposed by the state are emergency measures so that the consequences of the pandemic do not become un-treatable. I invite you to use these restrictions in the spirit of Advent to think about how we can deal with the great global problems of the pandemic, climate change and migration. As Christians, as friends of Jesus, we look up to the Son of Man. He shows us attitudes and postures that can lead us out of the crisis.

Last summer, most people did not want to believe that the pandemic would affect us so drastically again. Thanks to the declining number of infections in the warm season, we felt safe. Now we ask ourselves: “Who is to blame that it has come to this?”

Everyone is looking for a scapegoat and: it's always the fault of the other one. We see this with the two governments in Germany – the old and the new one. The bad situation is the other one’s fault. We do not want to hear that we are also to blame. We are to blame because we have failed to be vigilant and have no longer taken precautionary measures strictly enough. We are now becoming aware of this in the face of the pandemic.

But this also applies to other issues that frighten us. How nice it would be if a world climate conference like the one in Glasgow this month could prevent the worst consequences of climate change. But how do we react when we are asked to make a personal contribution and limit ourselves in one area or another? Then we begin to compare and emphasize that we are not doing as badly as others anyway. This is true for states, but also for individuals.

We build fences to prevent migrants from other parts of the world from coming to us. At the same time, few are willing to get involved in the development of poorer countries.

From time to time we are overcome by collective fears: “Where will all this lead? How many and which victims will the pandemic claim? When and with what force will the next virus or a mutation of the present one come? What damage will global warming cause in the future? Where is our society drifting when old systems and ‘world orders’ are dissolving and new ones are only gradually developing?” We worry about our prosperity, our freedom and the future of the coming generations.

The gospel we just heard was written at a time when things were upside down in some ways. Confusion was reigning. Many lived in fear. Religious minorities such as Jews and Christians were repeatedly used as scapegoats and were persecuted. In such a situation people asked themselves: “How can one still have hope?”

Some took refuge in the hope that it would all be over soon anyway. They interpreted all threatening events as the beginning of the end.

Not so the gospels! The authors of the Gospels endeavored to direct their audience and readership to Jesus Christ. They expect him to judge and rearrange the world. “When this begins, stand up and lift up your heads; for your redemption is at hand” (today’s gospel, Mark 13,37). The authors of the Gospels also advise vigilance. They warn against numbing yourself by whatever means. They warn against fleeing from this reality.

In the meantime, we have been waiting almost two thousand years for the Son of Man to come – to come with great power and glory and to bring his own out of these troubles. No, I must correct myself: most of us haven't been waiting for Jesus to come for such a long time ...- at least not in the sense that the Christians did back then: they believed in Jesus coming down from heaven in person to establish his reign and to declare the Last Days.

Still, I believe that these Gospel passages have not become obsolete or invalid!

Do I believe in Jesus coming down from heaven in person to establish his reign and to declare the Last Days? No, certainly not - I'm not on the lookout for a wonder man or miracle worker who comes Batman-style and takes me out of this world, takes us out of the world. Rather, I believe that the Son of Man Jesus Christ gave us the instruments with which we can master the threats we are facing:

In the search for strategies to cope with fear, it is still worthwhile today to look up to him. To look up to Jesus who ascended into heaven, to learn from him and to approach the challenges of our time with his attitudes.

We see alarmism, tactics of scaring, we see the division of population groups as well as the retreat into isolated worlds. But all this will not solve the problems at hand. Today we need global cooperation, solidarity, reconciliation between peoples, mutual respect, and listening to the worries and needs of others, and we need functioning concepts of integration.

This pandemic with all its regulations gives us time to pause, time for a break. We are forced to have time – time that we need to replenish, time to find a meaning in all this. According to tradition, every year Advent was a time to pause. A kind of self-chosen lockdown – Advent as a kind of lockdown that wanted to help us think about things for which we didn't have enough time in the daily machinery. Advent must not be a time to doze off, but a time to wake up and become aware of values that should not be neglected in our lives. Let's make a virtue out of necessity. And, thanks to the pandemic, let us give back Advent its original meaning.

For those wanting to have the readings digitally available: the archdiacese of Vienna has set up a database. You can achieve the readings in 13 languages including a mediataion as well:

Facing still restrictions on gatherings and singing in public we thought you might want to have a collection of Advent songs published by OCP (the publisher of our hymnal Glory and Praise). Thankfully, OCP set up a song list on youtube, so everybody is able to listen to and sing along some songs.

Wishing you a peaceful Advent season. 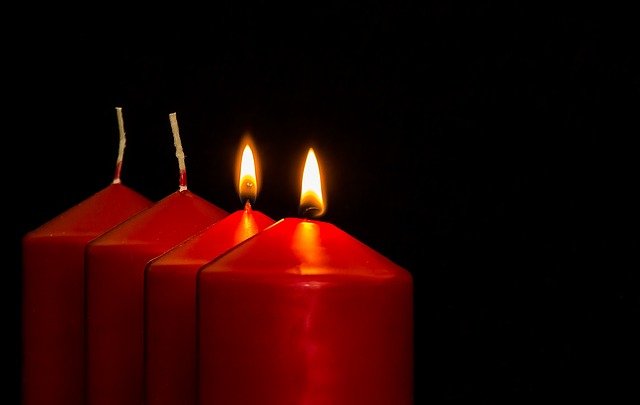