Today is born our Savior, Christ the Lord...

The Birth of Jesus

In those days a decree went out from Caesar Augustus that the whole world should be enrolled. This was the first enrollment, when Quirinius was governor of Syria. So all went to be enrolled, each to his own town. And Joseph too went up from Galilee from the town of Nazareth to Judea, to the city of David that is called Bethlehem, because he was of the house and family of David, to be enrolled with Mary, his betrothed, who was with child. While they were there, the time came for her to have her child, and she gave birth to her firstborn son. She wrapped him in swaddling clothes and laid him in a manger, because there was no room for them in the inn.

Our barbeque is always a special event. In spite of the not very favorable weather, many members attended our BBQ on Sep 20, 2008 and spent a pleasant afternoon together. The following pictures give some impressions about the friendly atmosphere. Many thanks to Jim Ziomek, Mike & Lori Hannan, Konrad Giersdof, Heide Doblhofer, Vanessa Hansen and all the volunteers who made this event possible! 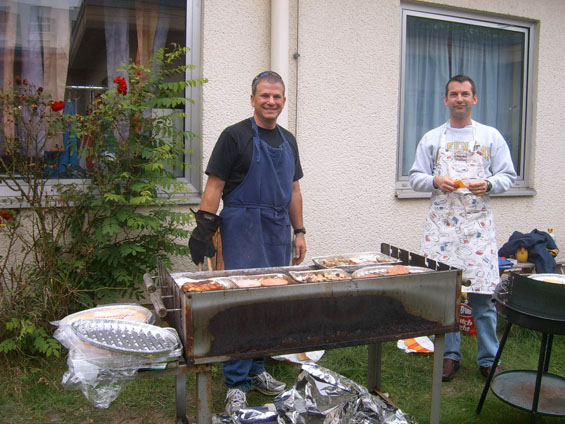 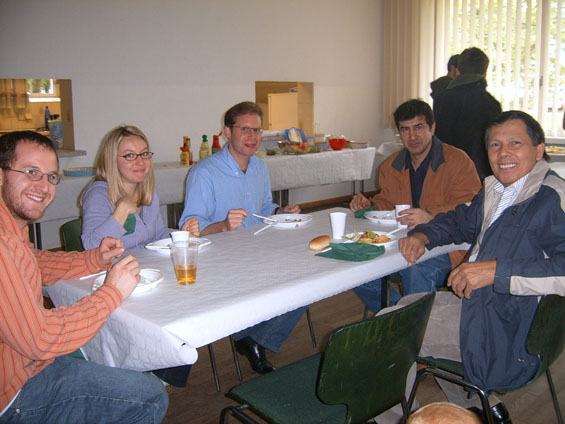 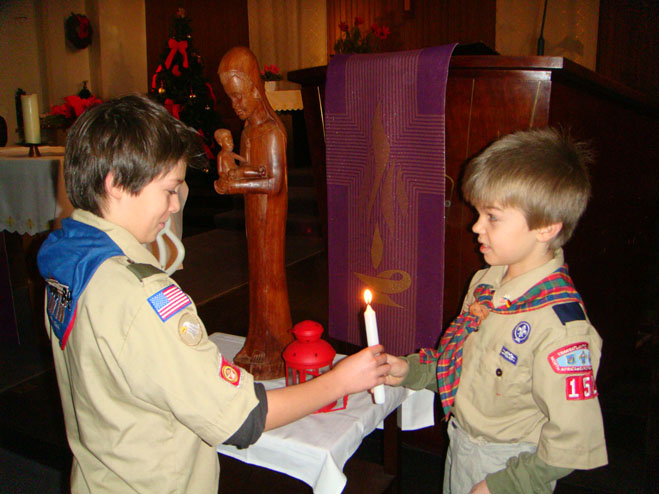 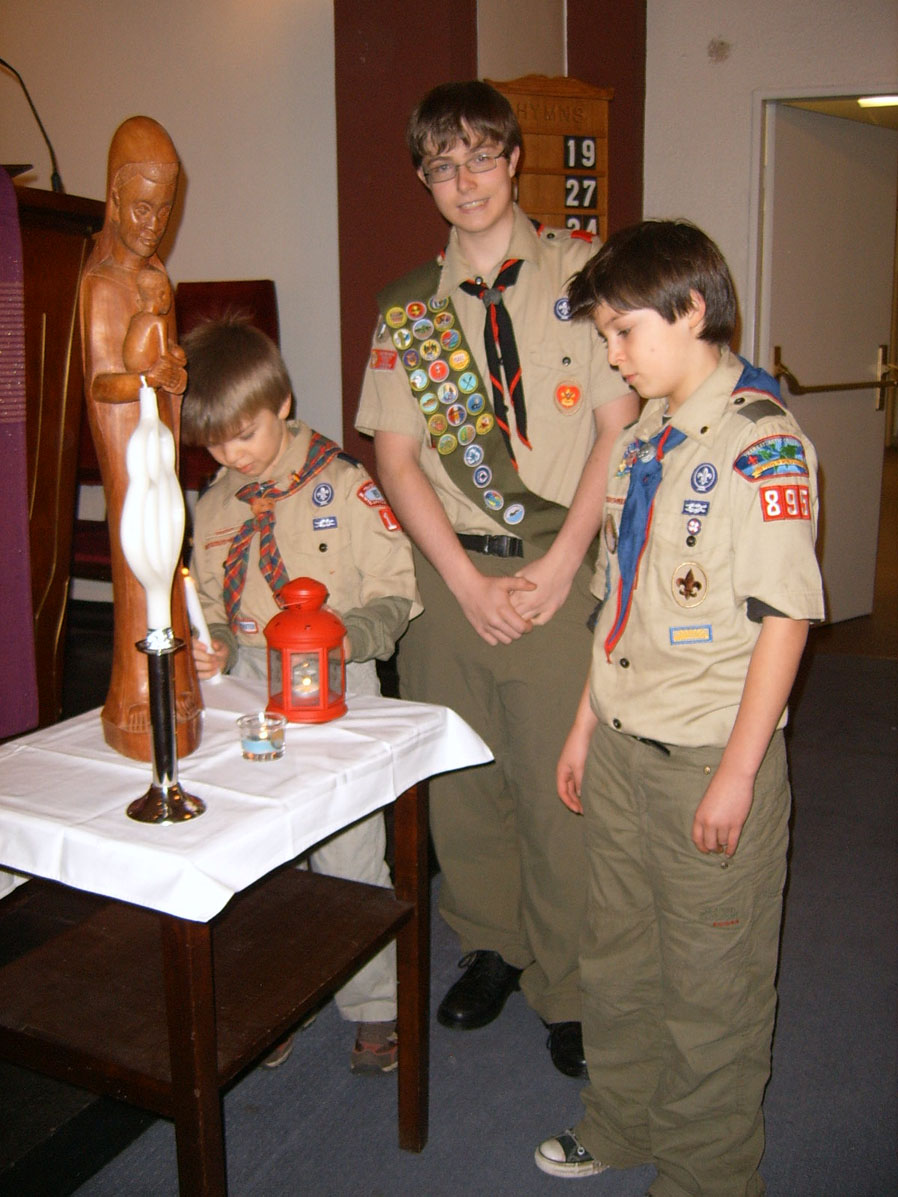 Our annual Thanksgiving Dinner took place on November 29, 2008. We celebrated the traditional American feast in a warm and jovial atmosphere. The lovely Thanksgiving Dinner was possible thanks to the many volunteers who spent long hours, some even days, to make it happen. Our sincere appreciation goes to Konrad Giersdorf for organizing this unforgettable evening and to all volunteers, especially those who donated and/or helped cook the turkeys, set up and cleaned up after the event.

We have a few pictures posted on our website to commemorate the event:

All Saints recently hosted the musical group Padi during their European concert tour on Sunday, June 29, 2008. Padi is composed of Fr. Igor Macaraeg, Fr. Melvyn Bufete and Fr. Franklin Tandingan. Funds collected will benefit the construction of their local church and school facilities in the Philippines. Padi means “priest” in the Filipino Ilocano dialect.

Berlin celebrated the 60th anniversary of the Berlin Airlift in 2008. The first C-47 Skytrain airplane landed in Tempelhof Airport on 23 June 1948 starting an unparalleled heroic act in which the United States saved West Berlin from starvation and being overrun by the Soviet Union. It set a signal to all oppressed peoples in Europe and elsewhere: there is hope for justice and freedom.

An important lesson from the Airlift is how a former enemy became friend. Former Airlift pilot and WWII veteran, Col. Halverson, mentioned at a function how he and others felt obligated to defend Berlin, now defenseless, against an oppressive Communist regime. The Airlift was about defending the freedom of those most in need.

All Saints, formerly the American Military Chapel, was built under the protection of the United States Air Force and Army. We are privileged to be able to celebrate Holy Mass every Sunday in a church that was the religious home to many of those heroes who defended the freedom of not only Berlin, but Western Germany as well. 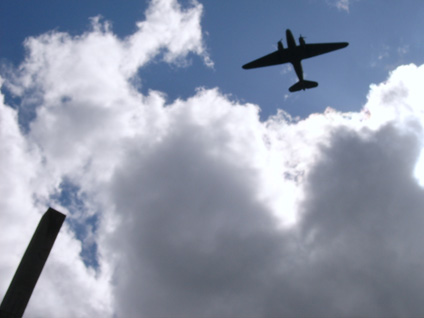 "The message from a wise 'ol flyer was clear...be careful of the small decisions in life as they will follow you forever; be grateful for what you have and help the others that don't have; "service before self"; and believe in yourself....”

On Sunday, February 10th, 2008, BSA Troop 46 ‘Freedom Outpost’ had the honor of hosting the legendary Col. Gail S. Halverson, also known as the beloved "Chocolate Pilot" or "Captain Wiggly Wings" by Berliners, at All Saints on Hüttenweg 46, the former American Community Chapel.

When we began planning this event, we were estimating a crowd of 100, but when word got out that we would be hosting the Chocolate Pilot, the numbers began growing...by leaps and bounds!

Before Col. Halverson’s arrival, we held a reading of "Mercedes and the Chocolate Pilot:  A true story about the Berlin Airlift and the candy that dropped from the sky" to over 250 children and adults.  This children’s book relates the wonderful story of Mercedes, a seven year old Berliner, and our estimed American pilot, Col. Halverson.  Although I had practiced numerous times, I could not help getting nervous reading in front of such a large crowd!  Troop 46 Scoutmaster Coleman Cain and Pack 152 Cubmaster Mike Kaiserauer both assisted the book reading by giving a brief overview of the Berlin Airlift and the Cold War.

Scoutmaster Cain opened the “official” event at 5 pm with the posting of the colors lead by Troop 46 and Pack 152.  Members of Troop 895, Girl Scouts of America and the VFW were also present.  Mercedes, the little girl in the book who is now a grandmother, attended the event as well.

The Chocolate Pilot, a World War II veteran, began the evening by recounting his Berlin Airlift experience.  More specifically, he focused on the importance of giving hope to children living in war devastation, such as Mercedes.  Troop 46 Life Scout Mike Duke states, „It was really great to get to meet a part of living history and it made the past become real for us.  It was cool to see the little parachute...in the Allied Museum and then to talk to the man that threw it out.“  The Berlin Airlift is celebrating it’s 60th anniversary in 2008.

Col. Halverson, at an amazing 87 years of age and a former Boy Scout himself, also conveyed the value of "service over self" to an enthusiastic crowd of nearly 400 people.  He states, "by being thankful for what you have and through serving others before yourself, you will have a wonderful life."  The Chocolate Pilot warmly praised Scoutmaster Cain and all the Berlin scouting volunteers for their ethic of "Service Before Self" and for sacrificing the time away from their own families to work with other people's children.

Several Berlin scouters  were honored to join the Chocolate Pilot and Mercedes for dinner later in the evening. Cub Master Kaiserauer states, “Amazing that Col. Halverson was not an Eagle scout as he truly sends the message of one. In our conversations... the Colonel told of his three sons and seven grandsons that achieved Eagle.... a true scouting family... and a true scouting experience."   Col.
Halverson and Mercedes were presented with Troop 46 neckerchiefs by Scoutmaster Cain at dinner.

Before leaving the restaurant, two German pilots, who were sitting at a table nearby, recognized the Colonel and enthusiastically approached him to talk about the Airlfit and Tempelhof Airport.  There is no doubt about it-the Chocolate Pilot has become a part of Berlin’s rich history.

We were touched to hear from Col. Halverson that “It was my honor to meet such a great crowd at the Church. The great welcome by the Girl and Boy Scouts was a highlight for me.”

Col. Gail S. Halverson is an honorary member of Troop 46 ‘Freedom Outpost’. True to Scouting Values for over 50 years.

Troop 46 'Freedom Outpost' would like to thank the All Saints community for hosting the legendary Col. Halverson (the Chocolate Pilot) on February 10th at Hüttenweg 46. We had nearly 400 people attend this very successful event.

We use cookies on our website. Some of them are essential for the operation of the site, while others help us to improve this site and the user experience (tracking cookies).

You can decide for yourself whether you want to allow cookies or not. Please note that if you reject them, you may not be able to use all the functionalities of the site.